Last year, Amnesty decided to run their annual Write for Rights campaign in support of 12 women, or groups of women, around the world currently facing abuses for defending human rights. In November they set up a T-shirt fundraiser, REBELLION, to support the campaign, which saw the charity work with nine women and non-binary artists on a series of feminist T-shirts.

Amnesty has been campaigning for justice and the right to freedom, truth and dignity for the past 50 years. They’ve long used merchandise to fundraise and campaign for this aim; they have a large online store which sells all kind of products and Fair Trade gifts, and they were our charity partner for our 2018 50/50 T-shirt campaign (you can check out our own insights from the campaign here).

Even for a grassroots non-profit organisation as big and well-acquainted with fundraising as Amnesty, running and promoting a pre-order T-shirt campaign can have its own nuances. So we spoke to their Commercial Executive Georgie White to pick up some lessons from Rebellion:

Remember, with a T-shirt campaign your supporters are not just donating to a cause, they also get the opportunity to demonstrate their support in a very prominent way (on their chest). Showing solidarity with activists and human rights defenders, as Amnesty does, requires a very active and engaged kind of support – something that Georgie believes was embodied through Rebellion, “Wearing a T-shirt is a way of showing your support for a cause, and it’s also a chance to start a conversation with your mates.”

Collaborate With Like-Minded Artists and Designers:

Amnesty has a history of working with designers – everyone from Katharine Hamnett, to Pam Hogg, to Shepard Fairey – so they understand the nuances of collaboration. They saw Rebellion not just as an opportunity to work with talented people, but as a way to celebrate and showcase the work of women’s rights activists as part of their annual Write for Rights campaign. “We wanted to help raise the profile of artists who were already using their artwork for activism in the UK, and create connections between artists and human rights defenders,” as Georgie explained. Pairing with people who are already active in their own work means they’ll really understand your mission, and you’ll be helping platform another entity doing vital work. Collaboration also helps to spread your reach beyond your own channels, adding more outlets for your campaign message.

… And Keep Your Campaign Relevant to Your Cause:

“Make sure the campaign is as integrated as possible with the cause or work of the charity,” was one of Georgie’s biggest takeaways. It might seem obvious, but it’ll stand you in good stead from the outset to think about how your campaign relates to the work you do. It’ll help mobilise your existing support base, and, if you’re working with external creatives, help reiterate the importance of their work. “I was constantly inspired and impressed by the creative talents of everyone involved in the project, and the willingness to support the cause,” says Georgie. “Some of the artists worked long hours well into the night in order to meet our tight deadline, because they passionately supported the cause and the women in our Write for Rights campaign.” 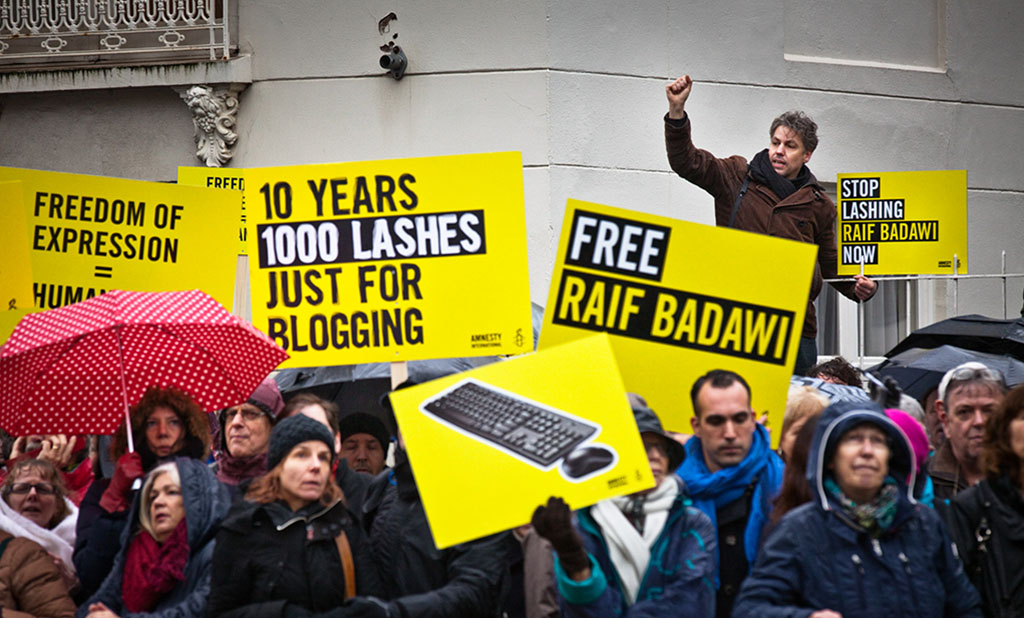 Our model means you can experiment with different types of campaigns. For Rebellion, Amnesty wanted to feature a number of artists, and as Georgie puts it, “Print to order allowed us to do this without the risk of producing excess stock.” It’s also effective for short-notice campaigns she says, “Amnesty responds to world events as they happen, and if we need to mobilise our supporters quickly, then the ability to add a merchandise element to a public campaign has huge benefit.”

Build In As Much Time As Possible:

One of the most important things to factor in when planning your campaign is time. As with any project that involves different moving parts, things are bound to crop up that throw you off course, and that’s especially true if you’re working with a diverse group of artists, like Amnesty did. Georgie’s advice here is to leave extra time for contingency if you can: “if you’re working with a number of artists, build in as much time as possible.” Starting planning in advance if you’re running a campaign around a specific event or date, getting the ball rolling with collaborators in early stages, and having early deadlines for submitting designs, are all tactics that will help you stay on track.

When it comes to promoting your campaign, it pays to “invest in creating some strong content; photos and videos,” in Georgie’s view. If you’re stuck, we’ve got resources to get you started with photography, photoshoots and what medium to use for promoting, but the key thing here is not to be intimidated. The content you use doesn’t need to be elaborate: “Recruit volunteers or friends to model the T-shirts and get out on the street with a phone camera if you don’t have much budget,” says Georgie. This is also one of the great things about collaborating with artists and designers, as they can help promote your campaign on their networks too.

For more tips on running a T-shirt campaign to raise awareness and funds for, or on behalf of a non-profit, head to our recent guide prepared by Great Ormond Street Hospital.

The easiest way to launch your T-shirt fundraiser. No Risk. No Waste.
Get started