Feel like you’ve got unfinished business with a campaign? We’ve seen many in our community decide to relaunch a campaign for a whole range of reasons; maybe the design still has plenty of mileage, there’s been an influx of requests to buy, they want to experiment with campaign length or dates, they’re thinking of planning their year with us, or a combo of all of the above.

Aside from the fact you’ll have done most of the legwork already, relaunches aren’t so different from standard campaigns, so if you’re after a refresher on running a pre-order campaign, have another (or a first) look at our guides to building your campaign, prepping it for success and really nailing your campaign page. But there are a couple of key things that’ll help you get the most out of a relaunch. Here we delve into making the call on relaunching, how to get the most out of your original campaign, and whether it’s worth adapting your design.

There’s no exact science to knowing whether to relaunch a campaign, but in short, it comes down to two things: whether you’re happy with how a campaign went, and whether you think there’s still an appetite for your T-shirt. There are a couple of good indicators that a relaunch is a smart idea to look out for once your campaign closes too:

Immediately After Your Campaign Closes: If you saw a last-minute surge in sales, or you get a load of messages from people gutted to have missed out, it could be worth relaunching as soon as your campaign closes. Using messaging like, “Back due to popular demand” or “We’ve had loads of requests to make the T-shirt available again, so here it is!” will avoid any confusion around why it’s live again.

Longer-Term Requests: When your campaign is over, fans and potential customers can still access your URL on our site, and our ‘re-launch request’ feature lets them leave their email so they can be notified if your campaign goes live again. If you get 10 of these requests, we’ll email to let you know. As well as making sure you don’t miss out on any post-campaign demand, this is great for building email marketing lists and measuring interest in future campaigns.

New Fans: It goes without saying that if your work gets featured on the likes of It’s Nice That or Dezeen, you’ll get a flood of new fans, and this means it can be a great time to relaunch a campaign. It’ll get picked up by a new audience, and helps give them a better idea of what you’re about too. Plus, if they’ve just discovered your work there’s a good chance they’d like the chance to own a physical version of your design.

Making The Most Of The Original Campaign

The beauty of relaunching a campaign is that you’ll have done most of the legwork already. You’ve got your design, you’ve done the promo for it, and you’ve got some practice running a campaign, so this time all you need to do is make sure you’re getting the most out of it.

Photography: If you’re happy with the photos you used for your first campaign then you’re good to go. If not, then this is your chance to retake them – check out these tips on taking photographs and staging photoshoots if you’re after inspiration. It can also be worth mixing it up with old and new imagery, so that the campaign feels fresh for your audience. This can be as easy as getting a couple of new photos for a gallery post, or to use in your stories.

Tagged Photos: It’s likely that the people happy with their new T-shirts the first time around will have tagged you in their photographs when they arrived. Be sure to archive these and keep them for use in your relaunch campaign; a simple gallery post featuring everyone wearing your design will really help showcase your tees. You can even take this a step further by following the lead of Emma Low, aka Pot Yet Tits Away Love, who ran a giveaway campaign to help hype relaunch. She got anyone who’d bought a tee from the original campaign to tag themselves in their T-shirt, with the winner getting a free pot.

Giveaways: On that note, giveaways, in general, are a great way to help announce and celebrate a relaunch. Try a similar one to Emma Low’s, or make like Kelly Anna, who offered a Le Sport T-shirt to one of the lucky commenters on her launch post.

There’s no need to change your T-shirt design for a relaunch, but if there were elements you wanted to revamp or just features you wanted to experiment with, this is a great time to do it. This can be as simple as offering different colour garments, or you can riff on the original design to make something that feels new.

Tweaked Design: Harry Elliott’s Ramen T-shirt was a sensation when it first launched, but he decided to use his relaunch as an opportunity to make a few refining tweaks, resulting in his rejigged Ramen 2.0 tee. Experimenting with a popular design is a great opportunity to take risks too; you could try adding text, changing up the colourway or adding placements to the back as well as the front.

New Colourway: If your audience really loved your T-shirt then why not try offering it across different colours too? When Kraggy relaunched his Mind Matters tee he added several different coloured garments to his lineup, even flipping the colourway on one. This is an easy way of expanding on your original design and gives fans of your work plenty of choice too.

New Garment: It’s always worth thinking about when your launch is happening too. We wear T-shirts whatever the weather at Everpress, but there are definitely peak times for different garments, and hoodie or long sleeve versions of a tee can help give your design new life through winter. Take Jimbo Bones’ much-loved Desolation design. He started out featuring it on a T-shirt, but for a November relaunch, he opted for a more seasonally appropriate long sleeve.

When it comes to the campaign itself, it could well be worth rehauling how you ran the first. From running multiple side-by-side campaigns to opting for a different length, there are a few different options you can explore to keep things interesting. 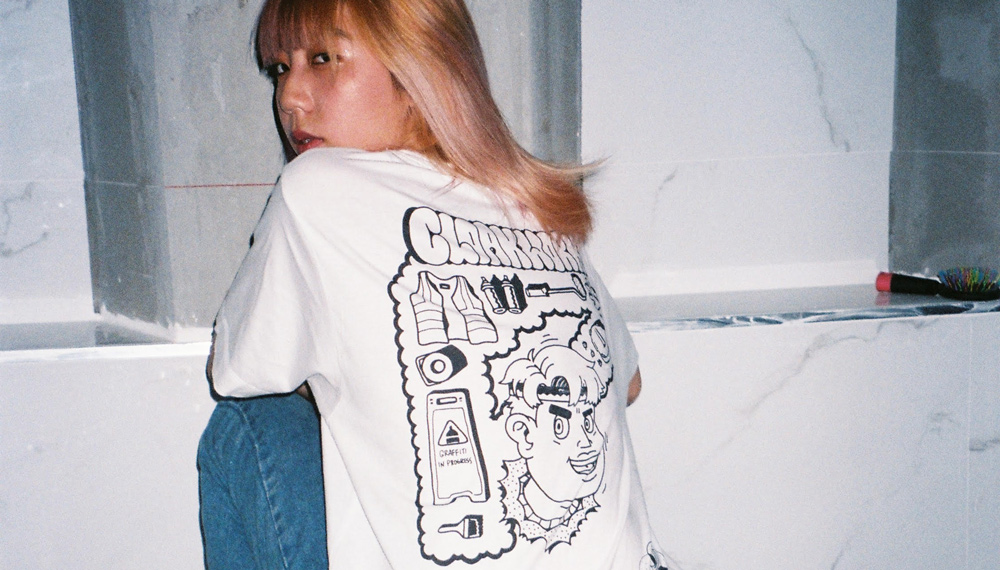 Simultaneous Launches: A relaunch of a hit T-shirt can be a great springboard to launch new designs too. Grace Miceli AKA Art Baby Girl often mixes tried and tested designs with new ones when it comes to launching, so she has a couple live at once.

Shorter Campaigns: If you’re really pleased with how a campaign went, and know there’s still an appetite for the T-shirt, a relaunch can be a great time to experiment with different campaign lengths. When Fruit Stickers relaunched their tees, they opted for a tight three-day campaign, running it over the weekend. This kind of length can help you maximise urgency, and if you’ve already run a longer/bigger original campaign, it can act as a mini version.

Regularity: Relaunches can be as frequent as you want them to be too, and there’s no limit to how many times you relaunch a T-shirt. In fact, keeping your campaigns running regularly can be a wise move, as it means your audience always have a chance to have a piece of your work. Jake Wheildon, the graphic designer behind Jawhel, almost always has a campaign live, and it’s often his hugely popular Spirit Lift tee, which is now into its 9th edition.

Thinking of planning your year with Everpress? Check out Florian Tripoteau’s insights.