We’re always singing the praises of T-shirt collaborations here at Everpress. Whatever your field, they bring opportunities to work with interesting, like-minded people, develop your own practice, and, especially useful when running for a pre-order T-shirt campaign, expand your audience, so more people get to hear about your work.

The collaborative projects we’ve seen have taken many forms; from friends teaming up on a new design, strangers coming together as a collective for a big campaign, or charities reaching out to creatives to work on a great cause. Here we’ve rounded up some of our favourite T-shirt collaborations spawned on the Everpress platform:

Vancouver label Pacific Rhythm has been collaborating with designers since their inception in 2013 – it’s one of the best ways of staying fresh, promoting across their community and extending their networks. Already a friend of the label, Deep Gnome was a natural partner for them; his designs crop up at many a Canadian club night and he’s already made a name for himself as a T-shirt designer through pieces he’s made for friends.

For Valentine’s Day this year, we asked nine of our favourite artists, illustrators, animators and designers to make a T-shirt for our ‘Love Is The Message’ campaign, with a donation from each sale going to the British Heart Foundation.

Animation director Sophie was actually part of the inspiration behind the wider campaign, having got in touch with us about wanting to work on a “slimy love slug valentines special.” Sophie specialises in fleshy, engorged, grotesque figures, while Jack’s sketches are like those scrawled ‘90s cartoons. Their ‘club’ tee was a perfect marriage of both styles, and it really showed how pairing up with another artist can help develop and challenge your own work.

Worldwide FM has had a few runs with us now, and one of the most exciting things about their campaigns is the way they collaborate. “It’s happened quite naturally,” station manager Dan Moss explained when we interviewed him, “we’ve developed brilliant relationships with lots of interesting people and collectives connected to the station.”

For their most recent, the station teamed up with Jazzy Sport, an independent Japanese record label and store who have long-standing connections to their Japanese family programmes. The T-shirts they created helped raise money for Change The World, an organisation providing supplies to Japanese earthquake victims.

Multidisciplinary designer Travis Kane and art director Alexander Dueckminor (or The Crystal Beach as he’s better known) are friends and collaborators whose work spans the worlds of music, fashion and film.

Travis got a lot of attention for his commitment to the poster a day Instagram challenge (he lasted 260 days), while Alexander is one of the best custom type designers around. This T-shirt was based on a poster the pair created together, demonstrating that working with like-minded people in your field doesn’t just establish you as peers, but can help push your work into new mediums too.

To coincide with the release of his album Primary Progressive last November, Mr Mitch launched a T-shirt designed in collaboration with Ross Aitken. The album explores the musician’s father’s battle with primary multiple sclerosis, and the tees feature Aitken’s abstract images of Mr Mitch with his father, which were also used for the album cover. The pair have worked together before, with Mitch using Ross’ photos for his mixes, so this was a natural next step in their artistic relationship.

The Art of Ping Pong and Lynnie Z created their T-shirt to celebrate their joint takeover of the ping pong room at the Book Club in Shoreditch. As part of the project, which was the first solo exhibition of Lynnie Z’s work, they transformed the space with her colourful illustrations, wall murals, collages and a custom-made ping pong table painted with one of her designs. The tees they made for the opening were just another surface to display Lynnie’s work on. 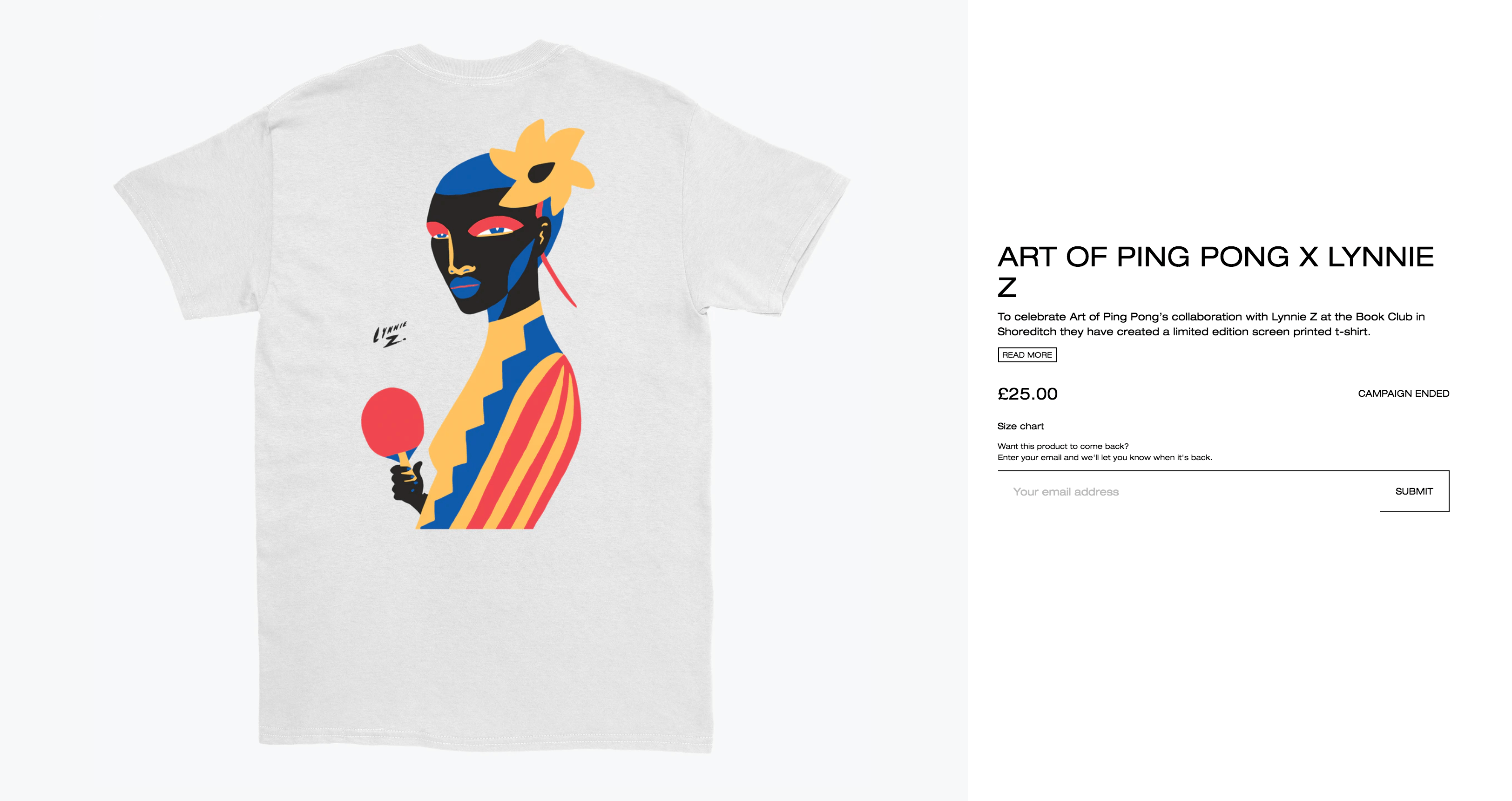 Neo2 Magazine, the Spanish culture magazine that’s been going since the mid ‘90s, went to the graphic studio Yarza Twins for help with their redesign last year. The studio, which is run by real-life twins Eve and Marta, brought its distinctive touch to the publication, including a trippy new logo that combines all the typefaces already used in the magazine’s editorial design. The first new-look issue came out last September, and the team launched this tee in November to celebrate the mag’s new visual identity.

Sanctuary saw architecture and design studio SODA work with 13 London based creatives, including Zaha Hadid Architects, on a series of T-shirts to raise money and awareness for The Childhood Trust.

When we spoke to SODA’s head of graphics Katie Stamp, she told us that bringing lots of people on board was a big part of their vision, “we wanted to create a sense of community, different people with different skills all brought together by one reason and one cause: London creatives giving back to the children within our capital.” The campaign ended up being one of our biggest of 2018, and Katie put a lot of that down to collaboration, “Working as a collective allowed us to broaden our audience capture, spreading the message far and bringing in more interest.”

Sister Supporter are a non-profit who work to end the harassment of women seeking abortions in Britain. For their Buffer Zones campaign they worked with 10 of the most exciting UK based illustrators, giving each artist a keyword to theme their design around, and with all proceeds going towards Sister Supporter’s fight for buffer zones across the UK.

The non-profit loved artist Kelly Anna’s ‘Defend’ T-shirt, telling us that, “her bright pink and black contrasting creation effortlessly embodies Sister Supporter’s identity: strength, resilience and empowerment.” Where Sister Supporter benefited from the insight and audience of their talented designers, the project gave Kelly Anna the chance to use her skills for a cause she felt strongly about too.

Bristol-based illustrator and DJ Danielle Doobay’s T-shirt collaboration with the Rhythm Sister collective started life as a series of limited edition prints to mark Rhythm Sister’s new mix series, which asks curators to include 50% or more content that’s created by womxn or non-binary people. The team quickly realised the prints, which were also used as artwork for the mixes, would work great as tees too, so they launched a T-shirt fundraiser to help raise money for domestic violence charity Refuge. 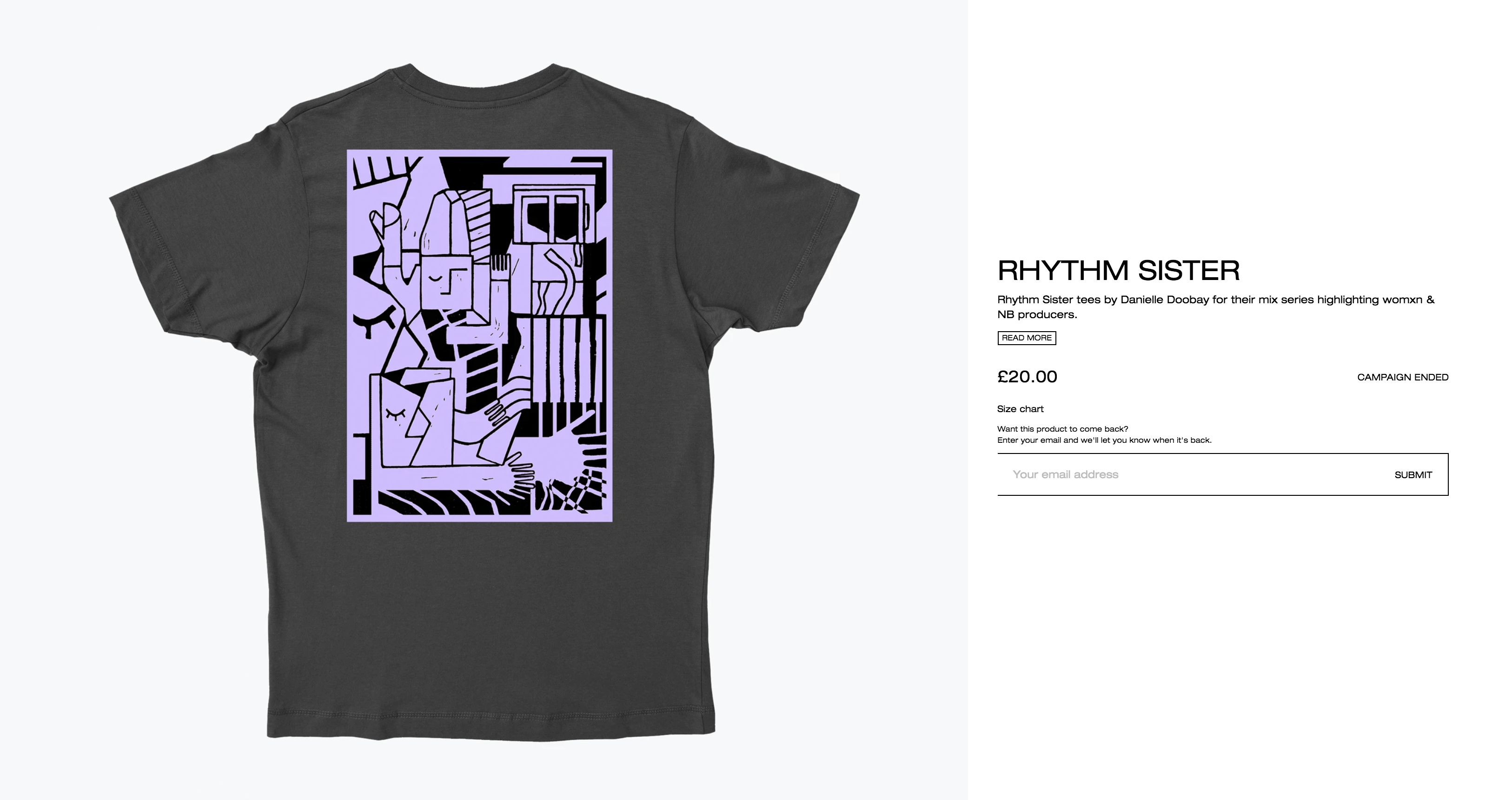 Learn more about effective collaboration from the best with our interview with Copson London’s Maria Falbo.