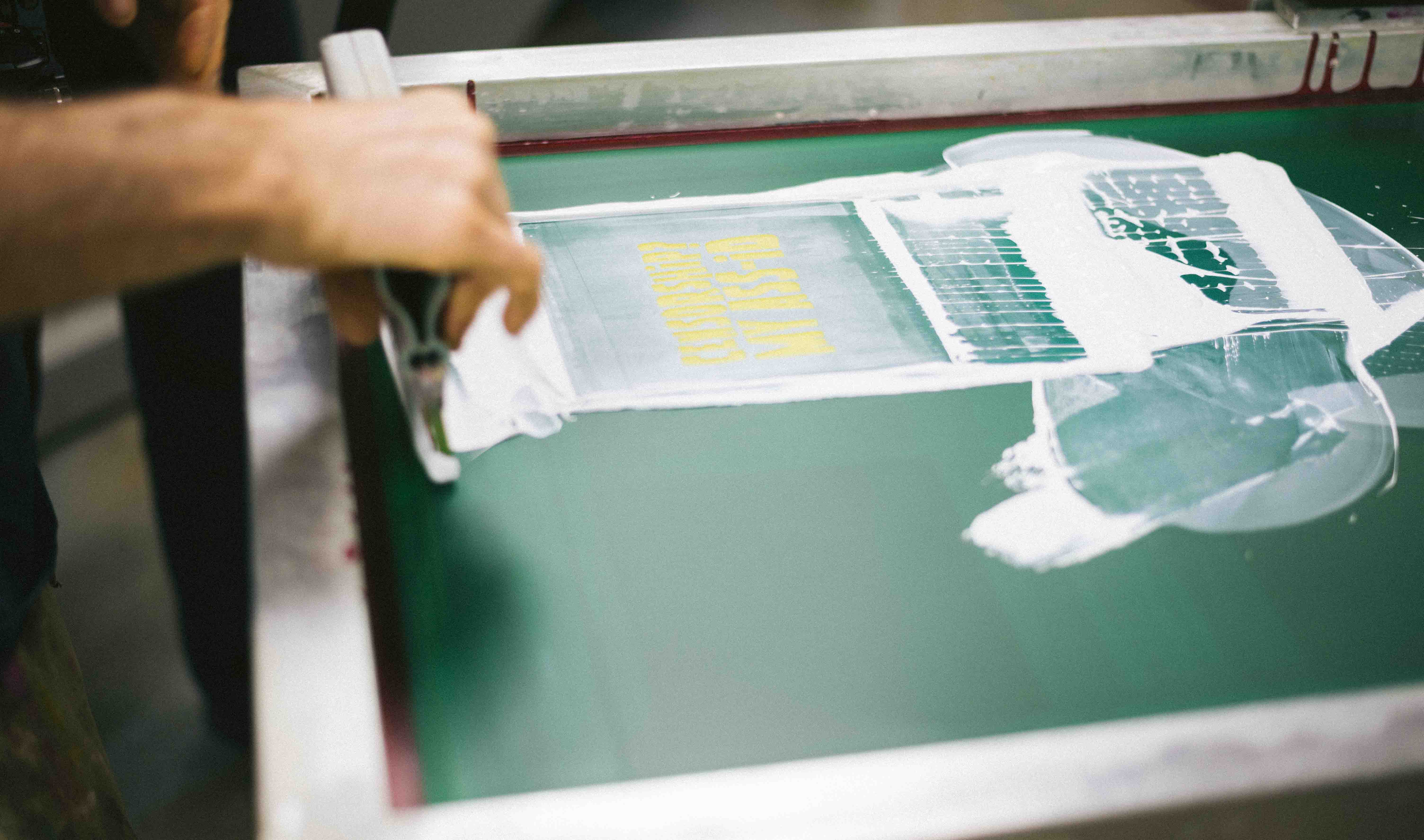 Looking at them today, you wouldn’t think screen printed T-shirts have the history that they do. Tracing back several centuries, the method began development with silk screen printing in Asia and morphed into the art form of serigraphy in the buzzy New York scene of the ‘30s, before it was adapted for mass-market production in the 1960s.

Fast forward to today, and it’s likely every T-shirt you see will either be screen printed or printed digitally. If you’re not too sure of the difference between them, check out our explainer for a quick run down, but in short, screen printing is our favourite for its vibrant print quality and ability to capture graphic designs. To help get you up to speed, we’ve put together a brief history of how screen print shirts came to be.

Where It All Began

There’s some disagreement as to the exact time the practice began, but the earliest incarnations of screen printing can be traced back to China somewhere between AD 221 and the Song Dynasty, which took place between 960 and 1279 AD. This early method involved placing silk between stencils made from tough, waterproofed paper. The stencils were then glued together, and paint could flow through the exposed silk, creating a printed design.

By the time the Middle Ages rolled around, silk screen printing was a well-practised art, and had been adopted throughout China, Japan, and most of Asia, in different technical variations. The technique didn’t find global popularity, though, until silk mesh became available for trade in the 19th Century; by the early 1900s the process had spread across Europe.

In England, Samuel Simon was the first to patent silk screen stencil printing in 1907. Calling him the godfather of modern-day screen printing wouldn’t quite be correct though; many others were filing patents around the same time for proto-types of today’s printing machines. Initially, screen printing was used mostly for printing wallpapers, and occasionally domestic fabrics. It wasn’t until the 1930s, though, that people really caught on to the technique’s potential, when a group of New York artists began experimenting with screen printing on paper, effectively turning the method into a totally artistic medium. These artists would later become the founding members of the National Serigraphy Society and go on to coin the term ‘serigraphy’ – a compound word from the Latin ‘sēricum’ (meaning silk), and the Greek ’graphein’ (to write or draw) – in order to differentiate the technique’s industrial use from its artistic application.

Modern-day screen printing owes a lot to the 1960s, for three different but interconnected reasons.

The first being the technological changes that were afoot in the ‘60s, which helped the screen printing production adapt to mainstream demand. In short, now screen prints could be mass-produced, and a key to this was Michael Vasilantone, the man credited with streamlining the process. Together with his wife Fannie, Vasilantone opened Vastex, a textile screen printing operation in Philadelphia in 1960.

Some of their earliest orders were bowling shirts, and after Vasilantone found himself struggling to meet the rapidity and scale of his customers’ demands, he started working on creating his own machinery. Among other inventions, Vasilantone went on to patent the dual rotary printing press in 1967, which sent revolutionary shockwaves through the industry: here was a machine that could print on fabric with greater speed and lower margin of error than any other method available. (Interestingly, parallel to this, the rise of cheap litho printing lead to a boom in newspaper printing and the rise of the underground press – the ‘60s were a peak time for the democratisation of print.)

Developments with inks present the second major factor in the development of the screen printing process. Even into the ‘60s, water-based inks were still the only option for screen printing onto garments, and this proved a barrier to mass production. For a start, the inks showed up pale on garments, and they took a long time to dry while being printed. This made them difficult to work with – they tended to dry onto the printing screen, and freshly printed garments had to be very carefully handled while still wet. This laborious process meant screen printers were few and far between, as the skill had to be learned through apprenticeship. Plastisol ink changed all of this. Made up of PVC particles suspended in a plasticizer, it’s more viscous than water-based inks (so it’s easier to pour into stencils) and more stable when drying, and it bonds to garments better which means a more durable print. Both qualities ensure a much easier process, so the advent of plastisol ink opened up the practice of screen printing and meant that practitioners could be more experimental with designs too.

The third major factor is the cultural climate of the 1960s. The ‘60s provided the culture that encouraged that demand in the first place. The likes of Andy Warhol and Roy Lichtenstein carried on the National Serigraphy Society’s baton, with vivid screen prints becoming the backbone of Pop Art, meanwhile, the music scene meant graphic screen printed band T-shirts really took off.

From T-shirt graphics to wallpaper, screen printing is now so ubiquitous that it’s almost impossible to appreciate it for the technical wonder it is. The ‘60s might have been the most seismic time for screen printing, but it continues to evolve and develop even today. Though the core method has stayed pretty constant over the years, the process has undergone its share of tweaking and optimising as technologies have advanced.

Like a lot of things, computers have meant big changes for the screen printing process, which these days tends to happen via graphic designs created digitally, and, in the case of medium and larger print studios, fed through an automated printing press. One of the biggest impacts digitisation has had on modern-day screen printing is the ability to print mesh screens digitally (this video is a cool visual explainer of how your artwork becomes a screen printing screen via a digital printer.)

If you’re just getting to grips with getting artwork prepped for screen printing, we’ve put together an explainer that you can check out.

Inks have come a long way too, both aesthetically and otherwise. From glitter through to puff and glow in the dark inks, there are now few effects that can’t be achieved with screen printing inks.

For our deep dive into the screen printing process at Everpress HQ head here. It’s got everything you need to know, from prepping the printing screen (a step which involves ‘burning’ the design onto an emulsion you’ve applied to the screen) all the way through to heat curing the finished T-shirt (crucial for making sure the print stays sealed in place and doesn’t fade).

Curious about why we prefer screen printing to the alternative, newer, DTG (direct to garment) method? Check out our run through of the pros and cons of both techniques. 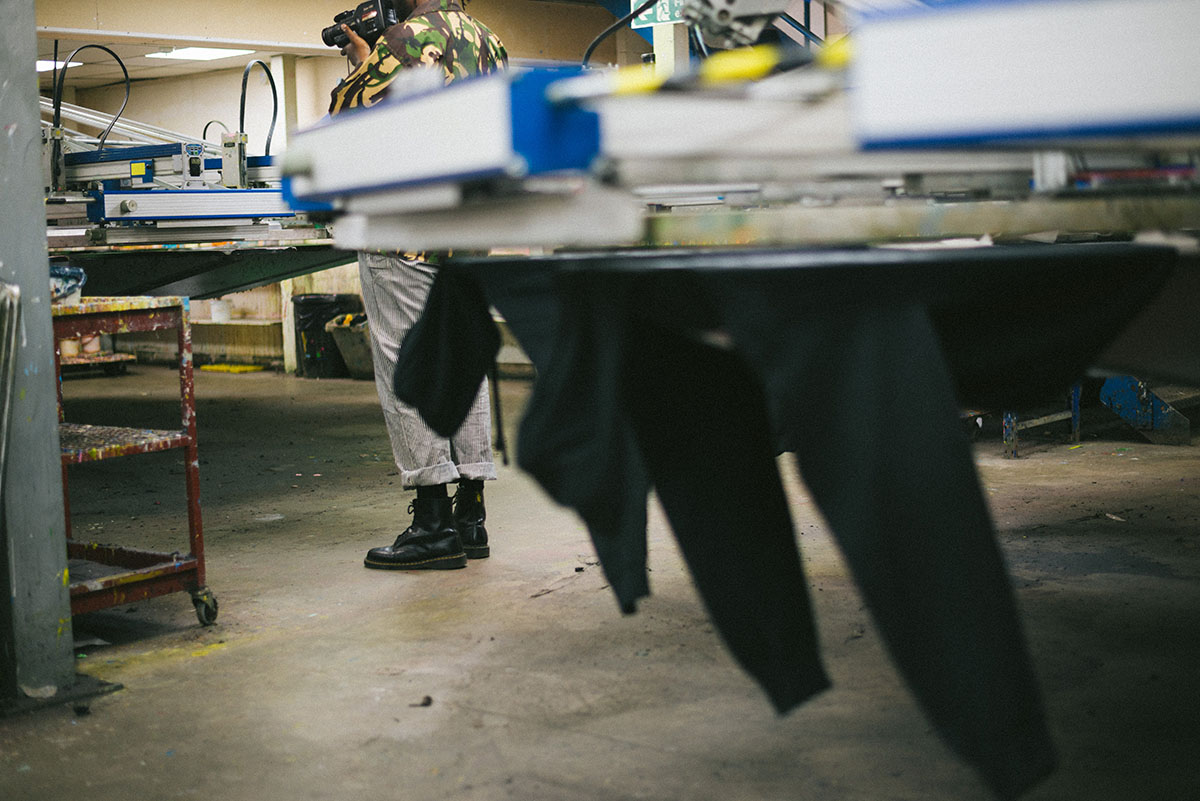 While the plastisol ink that helped screen printing take off in the ‘60s is still widely used, recent times have seen the emergence of vegan and sustainable inks, including revamped water-based inks.

Plastisol inks have endured because they’re cheap and perform well in mass-production. However, as most plastisol inks contain PVC and/or phthalates, they can be toxic to the environment. Plus, any waste plastisol ink that gets produced must be broken down with harmful chemicals.

So you can see why finding alternatives is important. Enter water-based inks. As their name suggests, these inks contain no damaging plastics. Though they have their cons – they still tend to come out less vivid than their plastic counterparts, are best used only with light-coloured garments, and can still be damaging in terms of the amount of energy required during their production – advances are being made every day.

Another key development that’s set to only get bigger over the next while, is vegan inks. (As an aside, despite the process often being called ‘silk screen printing,’ the screens used in screen printing are made of nylon and not silk, so no worms are harmed to make screen printed T-shirts.) When it comes to vegan inks, PETA has thus far only approved a small handful, but with all the developments currently being made on all kinds of vegan products, we’re eager to see what the future brings.

Firstly, automation hasn’t meant people are totally phased out of the screen printing process; someone still needs to feed garments into the machine, and quality control too. One of the biggest differences between a manual press operator and an automated one is speed. Where the capacity of a manual press is anything between 40 to 100 T-shirts per hour (depending on the abilities of the operator and the complexity of the design) the world record for an automated press is 2,139 T-shirts per hour. The average is lower of course, between 500 to 800 tees per hour, but you can see the kind of impact automation has had on T-shirt production.

So is automation set to totally replace manual production in the near future? Not exactly. Here at Everpress, we use a combination of both, depending on the size of the print job, with automated printing being ideal for larger jobs and manual perfect for smaller. Manual still has its uses, and though it may be phased out a little as DTG improves too, it’s hard to imagine it will be totally replaced.

All of which is to say: though it’s a technique that’s nearly 2000 years old, it has to be said that screen printing has a knack for keeping with the times – it’s been around so long for a reason.