“I’m always interested in projects that highlight the overwhelmingly positive contribution that migrants, refugees, asylum seekers and culturally diverse peoples make, and have made, to modern Australia.”

“If there’s a better way to make someone look good and spread a positive message whilst doing it than T-shirts, then I’d love to know!” 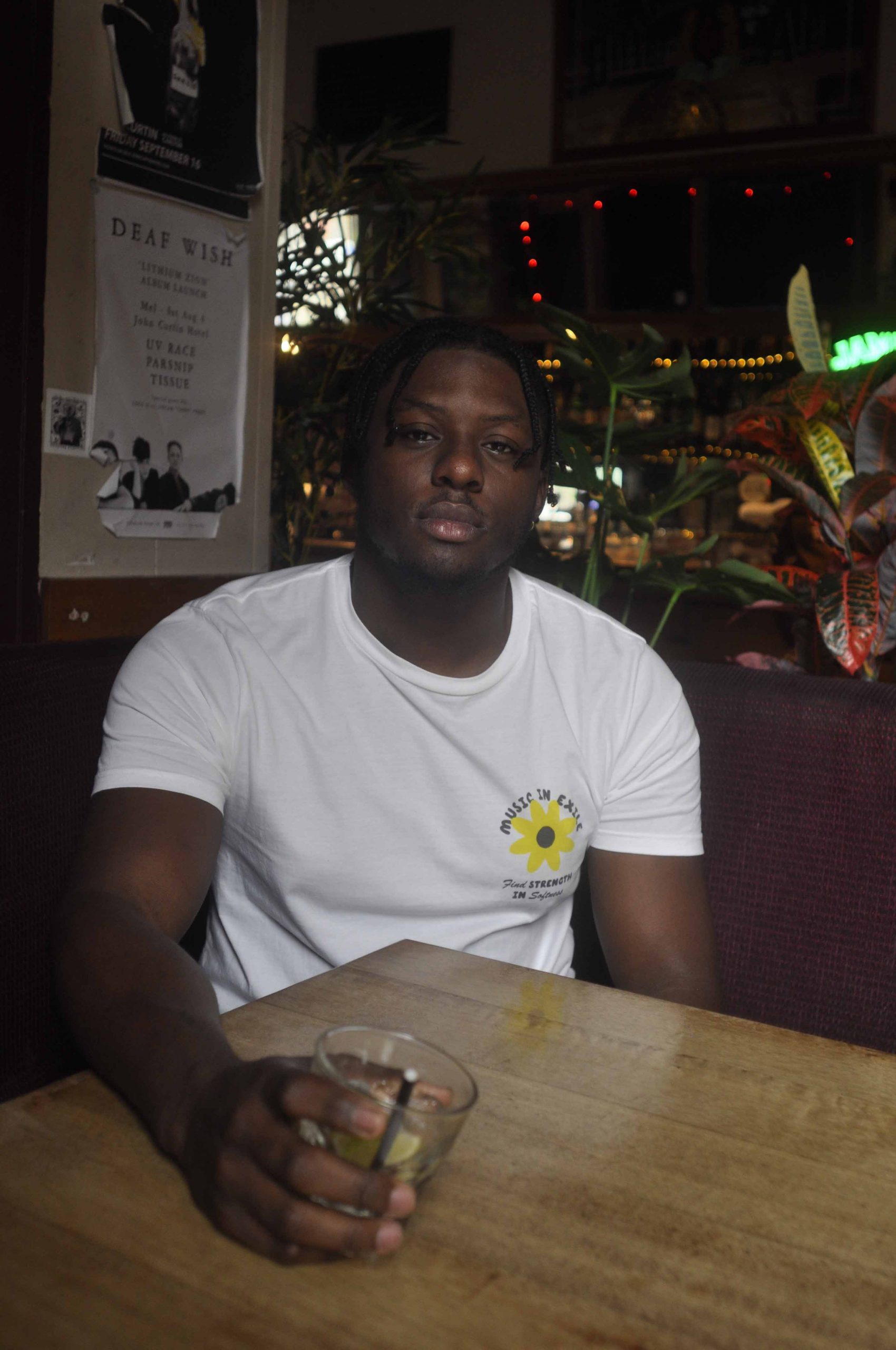 A T-SHIRT IS A WEARABLE BILLBOARD

Artist Claire Ritchie, has amassed a sizable following for her handcrafted art, with its signature abstract shapes and colours.  She created a design in collaboration with South Sudanese vocalist and legend Ajak Kwai.

“Artwork on a T-shirt is a good way to share a message or in this case promote an artist’s work. You never know who’s attention it may capture, and hopefully inspire them to look into that artist’s music and what they have to offer.”

“I use my artwork to convey my thoughts and feelings, and it felt right to combine my energy with Ajak and her music, as she imbues so much of her story in song. When we’re creating we’re connecting our inner thoughts, memories and feelings with the outside world and that’s beautiful.” 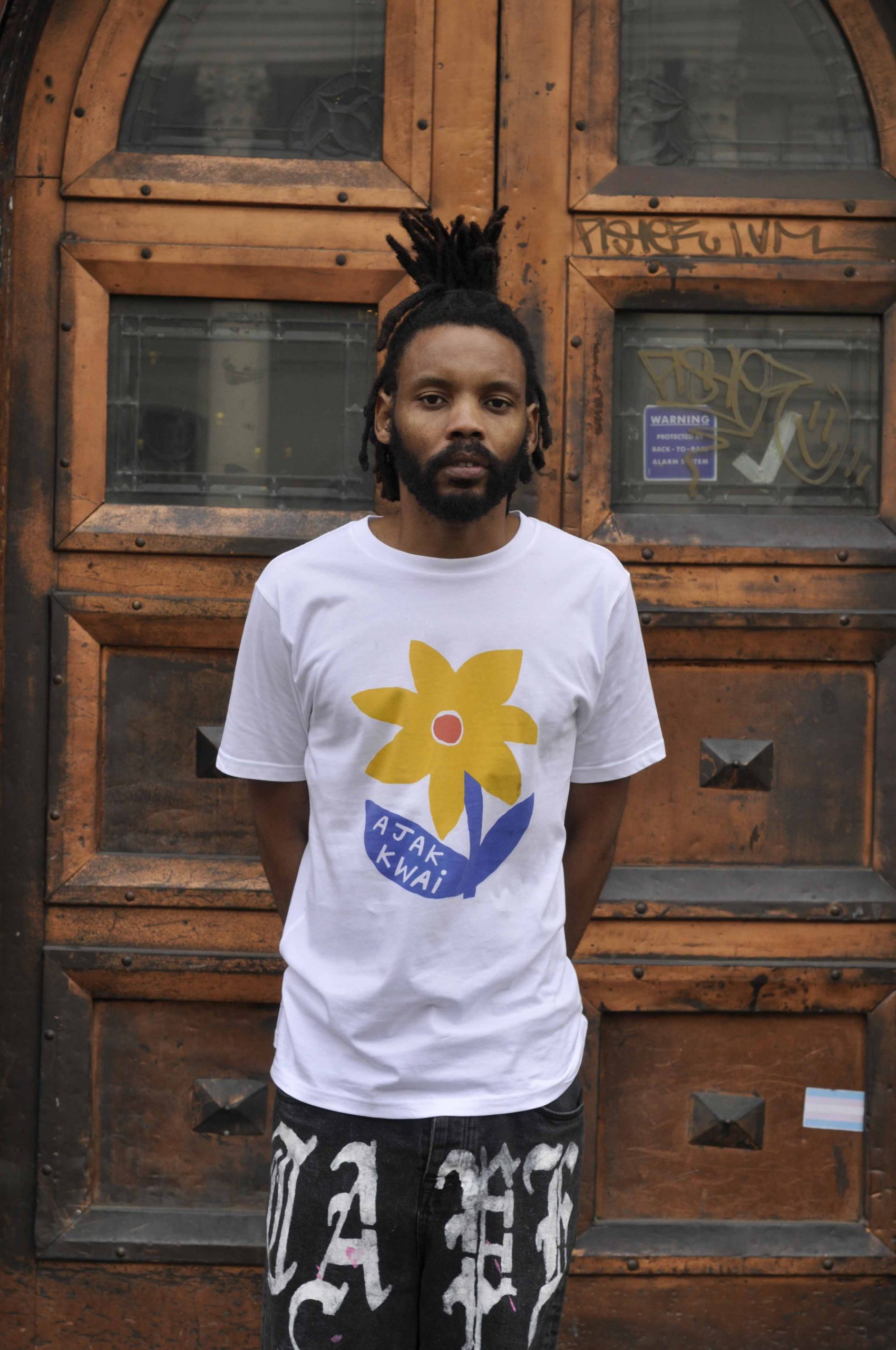 Boubacar Gaye is part of the nine-piece Ausecuma Beats, whose members hail from Senegal, Cuba, Mali, Guinea, Gambia and Australia. Their tee was created with graphic designers Rochelle Oh and Joelle Thomas.

“Music In Exile means a lot to Ausecuma Beats. After being in the music industry for a long time, this is the first time we’ve encountered anybody who is interested in supporting migrant artists. When MIE came into our life, we said, ‘This is what we are looking for!” So we want to promote and support their work, as they support us. We are happy there is someone who is interested in our story, an African story, a Cuban story, and an Australian story.” 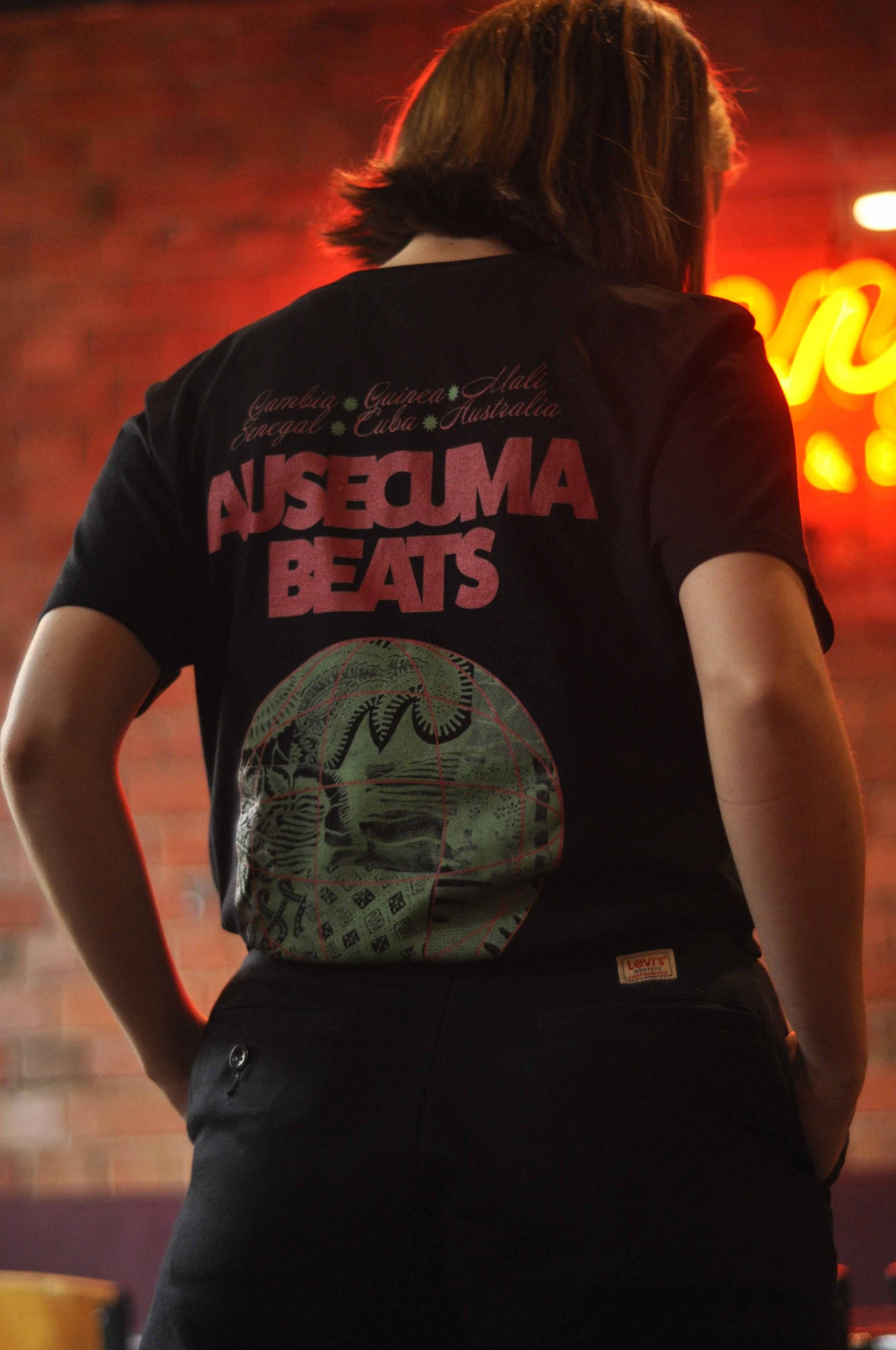 Graphic designer Celeste Watson, or Graphic Content, has already made work for Vogue Australia, among others. She produced a T-shirt for Nuer songwriter Gordon Koang.

“Choosing to donate proceeds to Music In Exile completes the circle of the T-shirt’s purpose; to support the self-determination of musicians from refugee, migrant or diaspora backgrounds — Gordon and others alike. It has been so important to learn more of Gordon’s harrowing story, and I’ve benefited so greatly from the infectious optimism of his album Unity — I chose to use the lyrics from his song “Asylum Seeker” to promote its message.”

“This project is about Gordon, his cousin Paul, his wife, his children and friends. It’s about all asylum seekers who are frankly left by the wayside as victims of political power struggles, war and greed. It’s for the survivors and those who don’t make it to safety. It’s my hope that this T-shirt will serve as a conversation piece for Gordon’s fans to engage in active allyship. This must be led by those who have experienced injustice firsthand, such as some of the artists supported by Music In Exile. I hope the simple act of wearing this T-shirt will encourage those who wear it to talk about our inhumane policies and practices when it comes to “supporting” those who seek refuge from political crises. Imagine if we could all hear more stories of hope and survival like Gordon’s.”

“As a proud second-generation Burmese Australian, I am the daughter of a resilient father who fled his country aged 12 because of political exile. He has never returned to his homeland (i.e entered the military state’s borders) since. One thing which helped him overcome his cultural displacement was music and its unquestionable power to unite us beyond the barriers of language, class and race. Music in Exile is built off this very premise, so to say that we are aligned idealistically is an understatement. As an art director and graphic designer I’m always looking for ways I can use my skills for good, particularly in the arts, so MIE is my dream collaborator.”

“A T-shirt adorned with a graphic is a wearable billboard – or protest sign – depending on the message. This design is to be read as a letter of support. A message of solidarity with asylum seekers. So, by wearing it you instantly open up new avenues to discuss the message behind the funky print. I hope you have a conversation you wouldn’t have had, perhaps with a stranger, because you were bold enough to wear it.” 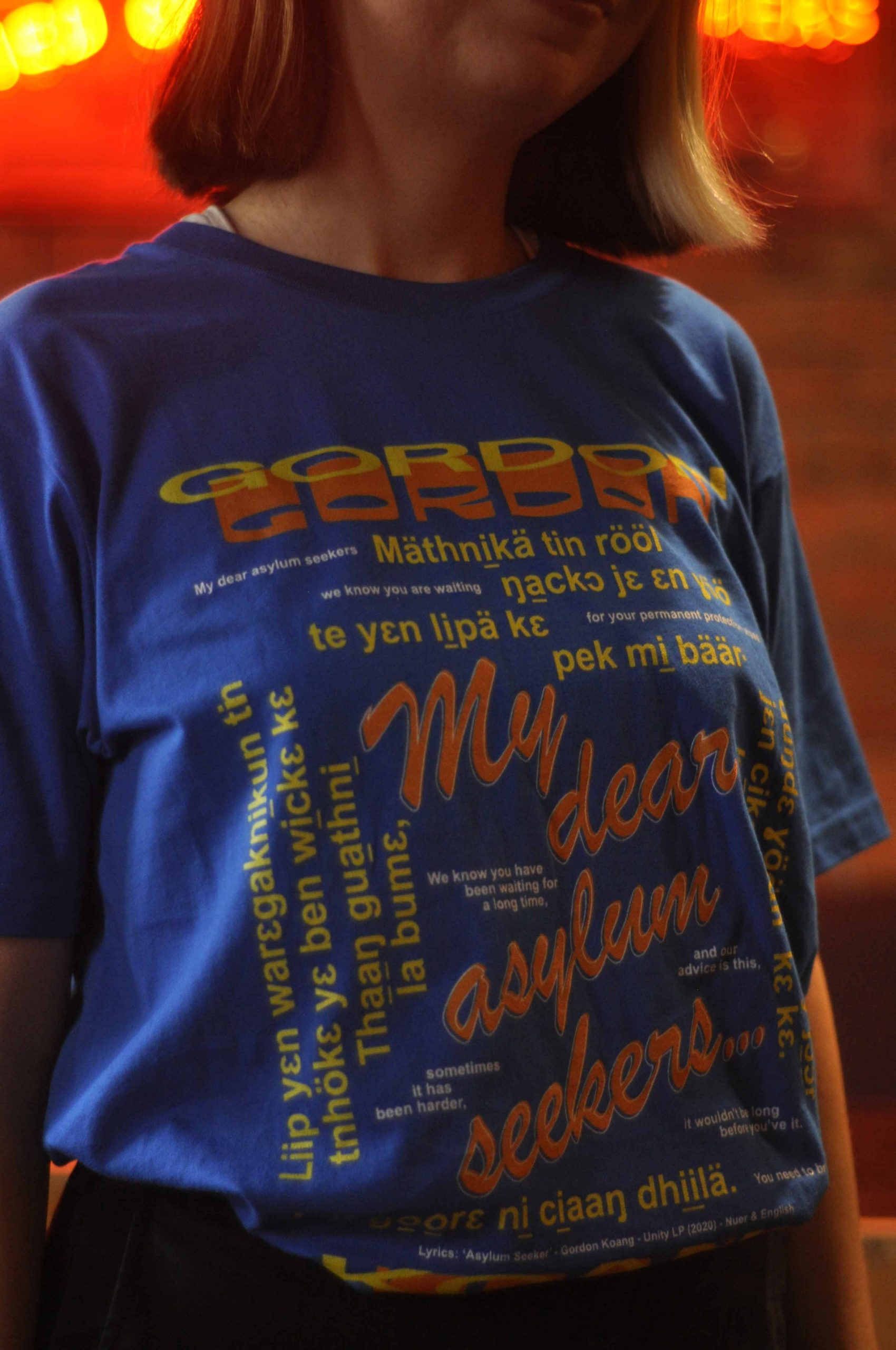 Chanel Tang and Ambrose Rehorek are the artist duo behind Creature Creature Studios, who since 2011 have produced work for everybody from The New Yorker to Melbourne Water. Their design was in collaboration with composer and performer Mindy Meng Wang, who seeks to fuse contemporary Western musical styles with her classical Chinese approach.

“We are honoured to support Music in Exile as they are a fantastic not-for-profit that helps Australia connect and hear amazing music from outside the mainstream.Not only giving opportunities to musicians from refugee, migrant or diaspora backgrounds, but helping spread art, culture, community, inspiration and perspectives to be appreciated by wider society.

T-shirts are a great form of wearable, accessible and affordable art. We hope they help promote Mindy and her music or are just enjoyed for their striking visuals.” 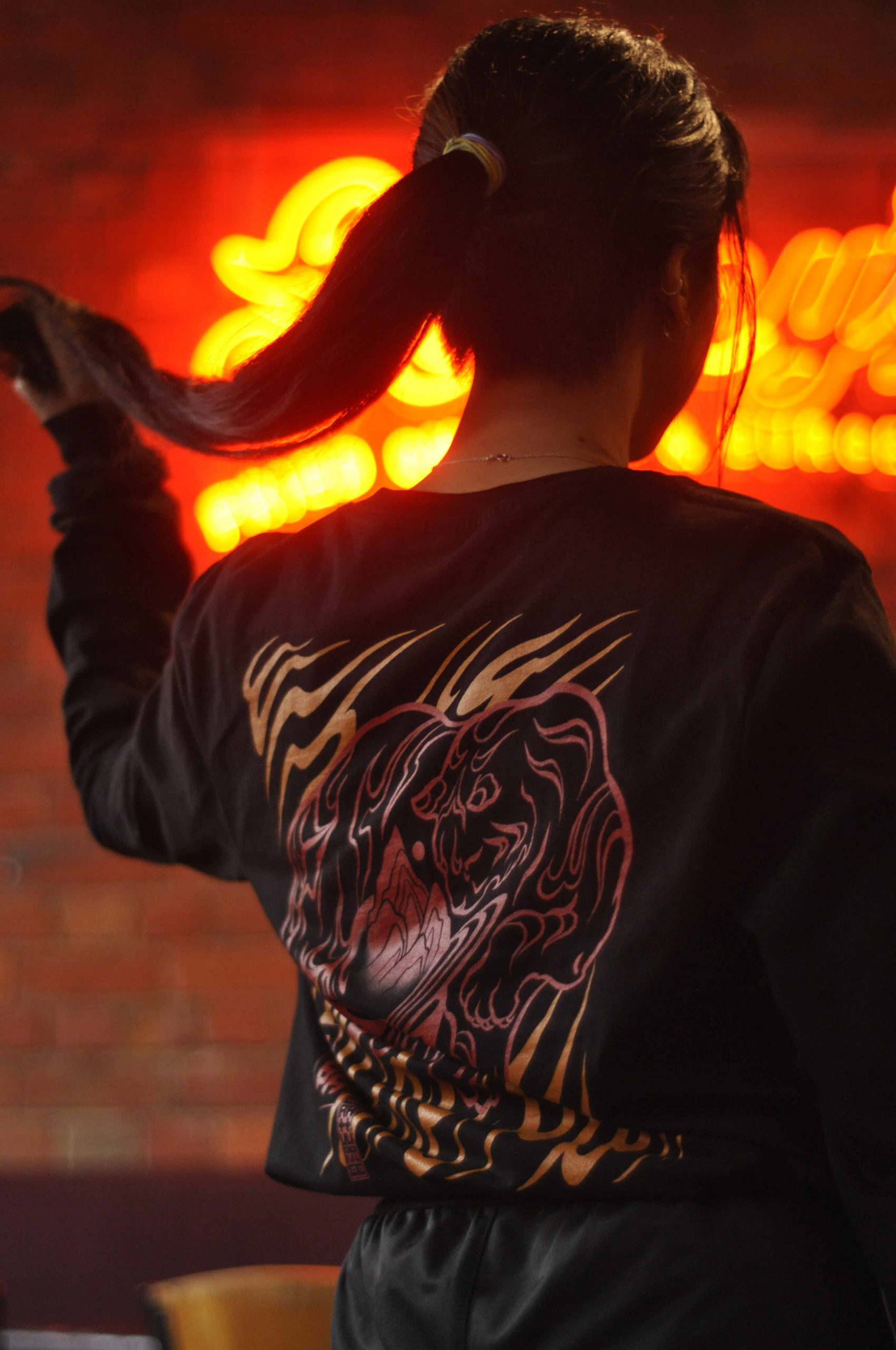 We’re celebrating the long-awaited return of nightlife with two live shows for Parallel.

INFERNO: The Nicest Party In London

Looking back on seven years of cult club night INFERNO with Lewis Burton.

What’s The Cost of Queer Utopia?

Tom Rasmussen on the relationship between clubbing, queerness and utopia.

Music — 5 months ago
Previous People and Culture at Everpress
Next Type In Focus: Design Open Call