It’s no exaggeration to call Hewlett’s work groundbreaking, and as he reaches his 50th birthday it seems there’s still plenty more of it to follow– with rumours of a Gorillaz TV show in the works. It’s a long way to come for a man that says he was too rude in his university interview to get a place, and admits that, at one stage, he was only earning £50 a month creating illustrations for Commodore User magazine.

We’re looking back at 10 pieces of work that show Hewlett’s ability to redefine and reinvent popular culture.

Intended as an antidote to what Hewlett calls the “disappointing” female superheroes of the 1980s British comic scene, Tank Girl – who was based partly on skinhead girls he saw in his home town of Horsham – helped propel the artist into the spotlight. “We went in to push the limits a little bit with that character and just be a little outrageous and say stuff that nobody said and nobody talked about and use words that nobody was allowed to use in comic books and try to get over this sort of pathetic censorship,” Hewlett told Dazed Digital. “You can’t show a nipple, but you can show someone being stabbed to death or this other bullshit that we still have.” 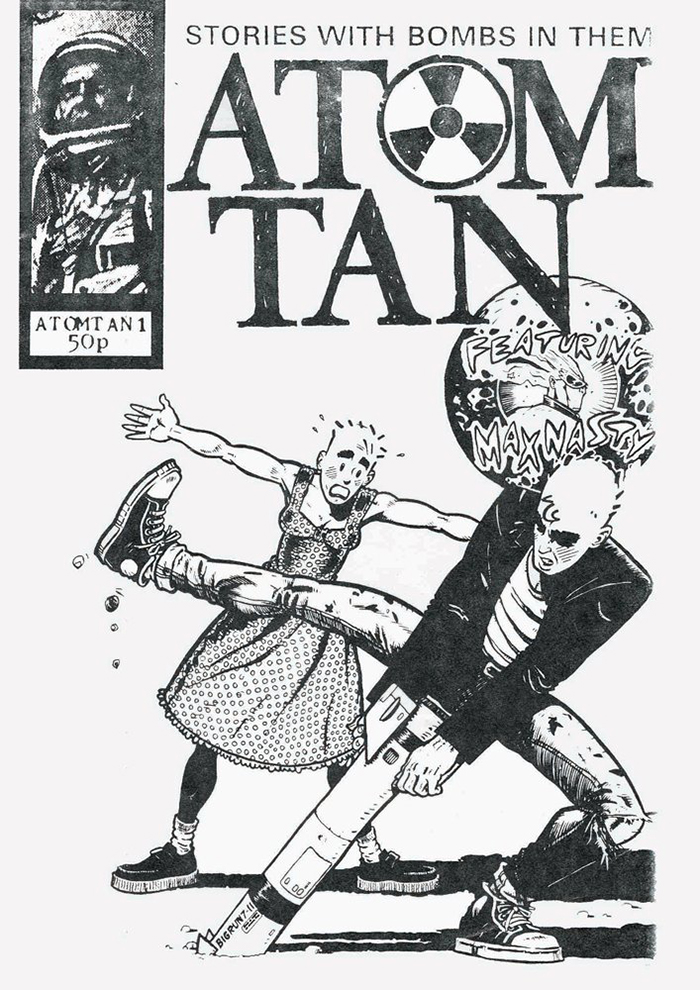 Fanzine Atom Tan was Hewlett’s first ever piece of published work, created with artist Philip Bond while still at college together. Published in 1987, the pair used a staff photocopier to create it and sold it to fellow students for just 50p. The fanzine was also the debut appearance of Tank Girl, who appeared on a one-page advert. Three decades later, copies of Atom Tan are rare finds – although last year a signed 30th anniversary reprint popped up.

In 1995, Hewlett created a comic book version of Pulp for the band’s Common People single release in France. The artist recreated the lyrics of the song, as well as drawing a severely angular Jarvis Cocker – clutching a wet sponge – for the front cover.

After the failed MGM Tank Girl movie, Hewlett spent six months working for DC Comics – which he says he hated – before finding himself on the hunt for work. He approached The Face magazine about working on a comic strip for them, and spent a year drawing Get The Freebies – which was later turned into the Phoo Action TV series, which unfortunately never made it further than a 60-minute pilot. The first Get the Freebies strip starred Hewlett himself pitching a new TV show about a gang of supervillains.

Hewlett made a mockery of manufactured pop music by, literally, manufacturing his own band members for Gorillaz – which he says the music press refused to even interview to start with. “We all enjoy watching cartoons, and we all have our favourite cartoon characters, so why can’t that work in the music industry?” Hewlett told Creative Review. “I mean most pop stars are cartoon characters anyway, they’re not being themselves, they’re pretending to be something they’re not so it just seemed the logical step to us.” The so-called “anti-band” won Hewlett the Design Museum’s 2006 Designer of the Year Award.

Monkey – Journey to the West

Starring a demon-fighting primate, Monkey – Journey to the West was a contemporary retelling of an ancient Chinese novel – one that Hewlett first encountered via Japanese TV series Monkey. Made in partnership with Damon Albarn and director Chen Shi-Zheng, the opera took four years and eight trips to China to complete. “We’d been to China many times and had the real privilege of travelling round the rural areas, staying with tribes, which no one gets to do,” Hewlett told The Guardian. “Once you get outside of the cities, what you find is a culture that is still intact – that hasn’t been spoiled by Western influences.” His Monkey set designs served as a backdrop for Chinese acrobats and dancers, and the artist created an enormous buddha that filled the stage for the final scene – so huge it took five lorries to transport it over from Bucharest.

Hewlett took the characters from Monkey on an Olympic journey for the BBC in 2008, designing a two-minute animated sequence that followed them as they made their way to Beijing’s Bird’s Nest stadium. The film was soundtracked by longtime creative partner Damon Albarn, and was divided into shorter sections used in titles, trailers and on set design. Hewlett told the Guardian he was “thrilled” by the opportunity, although confessed that working with the BBC meant him and Albarn didn’t have the same luxury of “doing exactly what we want” as they were used to.

A 2015 exhibition at London’s Saatchi Gallery showed a varied collection of Hewlett’s work – everything from posters for fictional 1970s movies to spidery sketches of twisted trees. The show included a set of oversized tarot cards in Indian ink and watercolour, inspired by Hewlett’s wife, who did a reading for him when they first met. Having read Alejandro Jodorowsky’s The Way of the Tarot, Hewlett became intrigued by the cards’ many hidden details and the importance of colour and mathematical structure, and decided to redraw all 22 characters based on what he’d learned from the book.

Despite Hewlett’s acknowledged status as a genre-defying artist, a quick Google reveals that there’s no single place that offers a comprehensive collection of his work. So it’s a relief that there’s no less than 400 pieces of work bought together in the artist’s first monograph, published by Taschen, which proved so popular it sold out within its first two weeks.

After Deadline magazine (the home of Tank Girl) closed, Hewlett fell out of love with the British comics scene and took a job working on set design for SMTV: Live. Although he told Vice that his work was never used because it was “a bit weird”, his illustrations did appear in some pleasingly manic opening credits for the show.

Our charity partner for 50/50 choose their favourite tees from the collection.